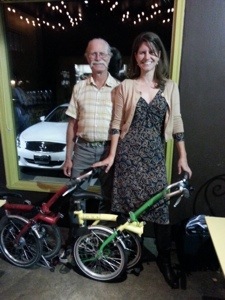 Claire Bromund’s lemon/lime Brompton with my red Brompton. Claire’s bike is at least as old as mine, but it looks shiny new because it has been well cared for, while mine looks ancient because it has been used so hard. We are at Selland’s, on the Tour de Vino which Claire organized, a combination of SABA-like bike ride and her regular wine tasting group.

9: Saw In the Next Room at CapStage, very funny and enjoyable, great acting. So many great plays in Sacramento.

11: Did a day full of dancing, historical dancing with Leilani and Robert (Sacramento Ballroom Society), just beginning to learn about Redowa, a kind of waltz, and doing a part of the Fledermaus Quadrille. Then to the waltz workshop with Rich Albanese, this first one a review for me but as part of a series of four, I’m expecting some new things as well. Then the regular Sacramento contra dance, a good evening with a room full of lively dancers and the superb calling of Joyce Miller and the superb playing of Hot Cider.

17: Danced in Davis, another contra sponsored by the Sacramento Country Dance Society, with a lot of newcomers. After a long dip in attendance, many of the regional dancers seem to be experiencing a resurgence, with larger crowds than I’ve seen in a while.

18: Took my Brompton to Channel Wasson in Palo Alto to get a rear rack added. With all the folding and unfolding and travel my bike sees, the fender with a little wheel was just not standing up to the abuse, and the rack should be much more stable and long lasting. I bought my bike from Channel about 16 months ago, and it is always a pleasure to take it back and just talk.

Then some time with my friend Michael in Oakland, and off to the BAERS (Bay Area English Regency Society) Cyprians Ball at the Elks Lodge in Alameda. The ball was an evening of waltz and country dances taught by Alan Winston. Slower and more elegant than contra dancing, and enjoyable in its own way.

The weekend in the bay area was all getting around on Amtrak, BART, Caltrain, and my bike. I love being able to do this, it just all works. Every place ought to work so well.

I’ve only taken one trip with it so far, from Reno to Sacramento and back on Amtrak, and it was a real pleasure. It tucked into the baggage shelf just fine. It folds down to the size of a medium suitcase, so works well for train, bus or plane (at least on Southwest, which is all I fly anyway). I’m going to fly with it for the first time in January, part of a trip to San Luis Obispo for Contra Carnivale. The rest of the trip is on train.

It was great to have a bike while in Sacramento. I rode the American River Parkway one afternoon, got to the conference I was attending (Safe Routes) on light rail and riding, and rode to dinner twice and the grocery store once. I’ve taken my road bike to Sacramento and even San Francisco before, but always had to use the bus to Sacramento because the only way to take full bikes on the Amtrak California Zephyr is to box them.

I’ve ridden a lot around Carson City, and everywhere I go I get compliments or at least comments, which was rarely true on my road bike. Kids especially think the bike is cool, and many ask me if they can ride it.

Though I test drove the bike for a couple of hours last summer, I was unsure about how different it would feel and handle from my road bike. My road bike is a 1971 Motobecane Grand Touring (made in France, 10 speeds, classic steel frame). The weight is not much different, and it doesn’t really handle much different. I lose a little power due to the small 16 inch wheels, and a little to a more upright riding position, but not much. Handling is a bit looser. not a bike to ride hands-free, but it tracks well. And it has fenders and wider tires, so it was no problem to ride it in a few inches of snow this morning.

I bought the bike from Channell Wasson in Palo Alto, who used to be the only US dealer, and the bike is made by Brompton in London, England. Channell spent about four hours with me talking about Bromptons and bikes in general, and I’d recommend him to anyone.